For over fifty years, I’ve trained, barely missing a workout and always in shape. As I look back, I’d say my longevity is my greatest accomplishment. I’ve squatted and deadlifted 500 lbs or more for 43 years. I’ve bench pressed 300 lbs or more for 43 years. (I’m changing my deadlift pull from traditional to sumo and not fully adjusted to the change so my deadlift has been low since 2011.)

My first competition was the 1970 AAU Wisconsin State Powerlifting Championship at the Madison, Wisconsin YMCA. Two IPF world Champions competed (Jerry Jones at 198 and Mel Hennessey at 242). Bubba Morgan lifted SWH and was so big the meet director drove Bubba to the Oscar Meyer meat packing plant to use their scales. That 1970 competition is etched in my mind because I bombed in the 198 class with a 415 lbs. squat. Over forty-three years, I’ve competed in 140 meets. Since 2009, I’ve enjoyed international competition, winning four IPF metals (one masters world bench press title in 2012) and Pan Am Games metals. I always lift more in competition than in training. On heavy training days, I’ll work up to my projected opener but no higher. I’m careful to conserve my central nervous system. In 2013, I will compete in 5 world, regional, and national championships. The first four championships were bunched together over 88 days. This is a tough schedule to maintain, and I get enough practice during championships handling maximum poundages without doing more at home.

I train alone in my home gym. Right now I’d rate my gym as a Cadillac, but that was not always true. I’ve trained in low basements, where my head was between the joists when I stood. I’ve trained for years in unheated garages and three-season porches. For six months in 2000, I trained outside on my front porch with no enclosure after my wife gave me 12-hours notice to empty our garage so our remodelers could demolish it. During this six-month period of privation, I’d carry my 7-foot PWL bar outside each morning around 3:30 a.m., pull a tarp off my weights, jack stands, and bench, and do my thing, finishing by 6:00 a.m. so that I could eat breakfast, shower, and peddle my bicycle 7.1 miles to work. I enjoyed watching the rising sun break the horizon each morning over Lake Michigan, but I was grateful that year when winter became spring.

My longevity is, I believe, the result of daily training and commuting on a bicycle. For decades I peddled 3,000 to 6,000 miles annually, piling up 14 to 17 miles daily to-and-from-work with regular side trips to pick up dry cleaning and groceries. Peddling is a low-grade workout which harmonizes the muscles after heavy lifting and works the cardiovascular system. For as much as I peddle, the farthest I’ve peddled in a single day is 52 miles. After that, I’m tired. I’ve peddled across Wisconsin 5 or 6 times. I’ve peddled across Iowa. I peddled to Missouri and back one trip. On bicycle trips I pull a trailer with a 106 lbs. dog and my gear. With the dog sitting in the trailer watching the miles roll by, I’m pulling around 250 lbs. I can average around 40-42 miles daily on cross-county trips before I tire. I’m retired now and I don’t relish peddling before dawn on rainy days solely for exercise. Thus my peddling volume dropped. However, the past two years I’ve done much of my cardio work on an indoor recumbent bicycle. It’s convenient. The riding position is one I prefer, identical to my street bicycles. I can peddle in comfort during the winter. I often peddle after dark. I never thought that I’d peddle indoors, but it’s working for me.

I’m self-coached. I like to think I know everything about powerlifting, but I admit to coaching errors over the decades. A knowledgeable coach makes a difference.

In 1980 I was frustrated by the open use of strength-inducing drugs. While living in Mobile, Alabama, I co-founded the ADFPA with Brother Bennett and Attorney Vince Kilbourn so lifters could compete without drugs. Drug-free lifters don’t get hurt if they train daily. All muscles shut down simultaneously when the bar is too heavy. We hosted the first drug-free meet in the nation in Mobile, Alabama, in June, 1981. In August, 1982, Brother Bennett and I hosted the next “Mobile Open” and included women lifters. Women powerlifters in 1981 were controversial.

In Wisconsin we are blessed to have Bruce and Sue Sullivan, and now the younger part of the family – Tonya Lambeth – for creating and sustaining our outstanding USAPL organization. This family is synonymous with drug-free powerlifting. Thank you Bruce, Sue, and Tonya.

At age 62 I don’t feel old. Someday Father Time will catch me, but I don’t know when. 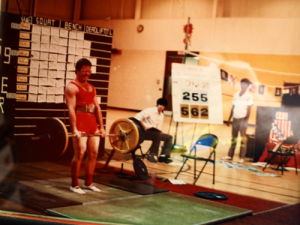 This photo is from the 1980 USPL Mississippi State Championships in Bay St. Louis, Mississippi, hosted by Brother Bennett, I pulled a 255 kgs/ 562 lbs. deadlift. (March 9, 1980). Fred “Dr. Squat” Hatfield had moved from Madison and was living in New Orleans. Dr. Squat lifted in this meet, probably squatted 1,000 lbs., and borrowed my deadlift slippers for his deadlifts. Joe Bradley was paroled from the Wisconsin State Prisons and had moved to New Orleans to live and train with Dr. Squat. Joe Bradley lifted incredible poundages this day, all with the seam to the leg of his squat suit cut open to accommodate his huge thighs. Brother Bennett and I shook our heads over the open steroid use by so many lifters at his meet. By the end of 1980 Brother Bennett, Attorney Vince Kilbourn from Mobile, and me had our paperwork which created the American Drug-Free Powerlifting Association. In 2006, Hurricane Katrina destroyed this gym at Brother Bennett’s school which sits across from a two-lane road which separates it from the Gulf of Mexico. 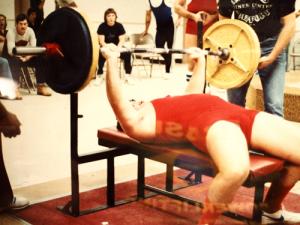 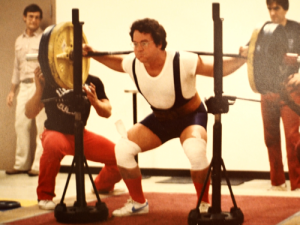 Also from the 1980 Gulfport Open, I squatted 250 kgs/ 551 lbs. as a 220 lbs lifter. (Dec. 6, 1980).  Attorney Vince Kilbourn, who incorporated the ADFPA in the State of Alabama, watches from the far right rear.  I wore a first-generation squat suit, probably from John Inzer.  The squat stands, which were a standard design in the 1970’s and ‘80’s, incorporated automobile tire jacks (used before our modern scissor jacks now standard with cars) which were welded onto a base of heavy weights, here a smooth gear from a scrapyard.